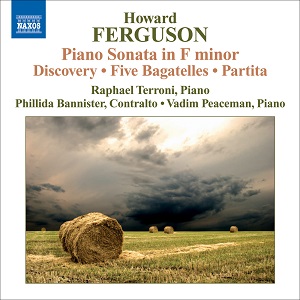 With Howard Ferguson, it was always about quality, not quantity. Ferguson was extremely self-critical. As a result, his music only emerged after much deliberation and revision.

Over a span of thirty years, he wrote only nineteen works. And then he stopped because he felt he had nothing left to say.

But when he spoke musically, he said plenty. This release features one of his most performed and respected works, the 1940 Piano Sonata in F minor.

This three-movement sonata builds on the foundations of the English Second Renaissance. Some Vaughan-Williams-inspired harmonies are present, giving the work a British character.

But Ferguson moves beyond that. The sonata remains tonal yet seems unfettered by traditional tonality. Raphael Terroni performs the work with great sensitivity. There’s a melancholy undercurrent in a lot of Ferguson’s music. Terroni makes the listener aware of it, without letting the emotion overcome the work.

Terroni does a masterful job with the Five Batagelles from 1944. The fast-paced bagatelles (1, 3, and 5) crackle with energy. The slower ones (2 and 4) calm and soothe.

Ferguson’s Partita was composed for orchestra. He also wrote a piano reduction of the score, for either two pianos or piano four hands. Vadim Peaceman joins Terroni in a performance of the two-piano version. The pair make a good team. And although I prefer the orchestral version, I enjoyed this performance.

Discovery, Op. 13 is considered one of Ferguson’s best works. It was one of Kathleen Ferrier’s favorites. Contralto Phillida Bannister delivers a beautifully nuanced performance. Her inflection and phrasing highlight the emotions of the text to great effect.