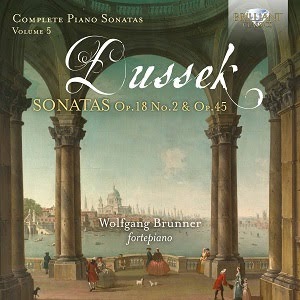 Jan Ladislav Dussek was a pioneering piano virtuoso who continually pushed the boundaries of his instrument. And in some cases, he was responsible for some of the improvements made to the fortepiano — especially range.

Volume 5 in Brilliant Classics’ series features pianist Wolfgang Brunner. His performances are top-notch. But I found his liner notes even more rewarding.

In them, Brunner compares and contrasts the differences between Viennese and English fortepianos of the early 1800s. I found it a revelation. I now better understand the importance of matching the music with an instrument of its time.

Brunner plays the Sonata in A minor, Op. 18, No. 2 on a Viennese fortepiano. The sonata is similar in style to those of Haydn. The texture is thin, the voicing simple and straightforward. The light and responsive action of the fortepiano was well-suited to this music.

Brunner also uses this instrument for the Sonata in G major, Op. 45, No. 2. Published in 1802, the three Op. 45 sonatas show major advances in playing and compositional technique. There are more chords (and chords in motion). The harmonies are more complex, and there is more motion in the inner voices.

The Viennese fortepiano lets all the detail of the music show through. Runs sound cleanly executed and the whole sonata has a feel of elegance about it.
Brunner uses an English Broadwood fortepiano for the first and third sonatas of the Op. 45 set. The sound is fatter, and the action a little louder. The English fortepianos tended to smear the sound more than their Viennese counterparts.

If the second sonata invoked Haydn, the other two conjured up Beethoven. The sound was brawny, bold, and a little rough around the edges. Elegance was replaced with raw emotion.