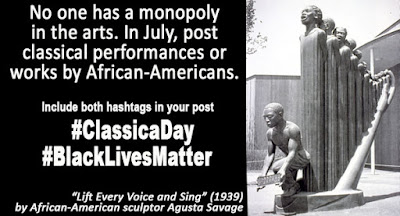 Here are my posts for the fourth week of #ClassicsaDay #BlackLivesMatter

This aria comes from Moore’s 1985 opera Frederick Douglass. The text is a setting of Douglass’ own Fourth of July speech delivered in 1852.

Smith composed this work while studying with Vittorio Giannini at Julliard. Originally, it was an assignment for a composition class in larger forms.

Dett wrote “We have this wonderful store of folk music—the melodies of an enslaved people … But this store will be of no value unless our musical architects take the rough timber of Negro themes and fashion from it music which will prove that we, too, have national feelings and characteristics.”

Kidane is a British composer of color. He wrote, “[Classical music organizations] should promote diversity. By doing so they will make classical music meaningful for all and sow interest among future generations.”

Schuyler was a child prodigy billed as “The Shirley Temple of American Negros.” She was also a talented composer, author, and journalist. She died in a helicopter crash in South Vietnam while covering the war.

Spiva modeled his choral work on isicathamiya, a traditional Zulu call-and-response, and blends it with Hindustani drones and Ewe music from Ghana.