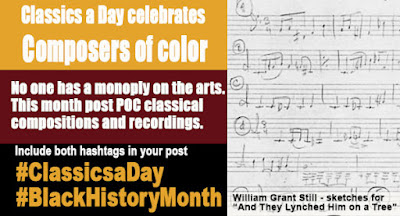 As always, I tried to find works and composers that I hadn’t shared before during #BlackHistoryMonth. Here are my posts for the second week.

This piano suite was published in 1910. Burleigh dedicated it to his friend, the British composer Samuel Coleridge-Taylor.

This piano suite was published in 1912. Dett’s goal was to synthesize African-American music with classical forms in the same way Dvorak did with Czech folk music.

Dawson completed this work in 1932, and it was premiered by Leopold Stokowski and the Philadelphia Orchestra two years later. Dawson revised the symphony in 1952 after visiting Africa.

Still wrote this about his 1937 work: “The Symphony in G minor describes the black people of the current America, a totally new man, as a result of the mixture of white, Indian and black bloods”.

White recorded his composition in 1920. It was recorded for Broome Special Phonograph Records, the first black-owned label in the States.